Paper towels are single-use products often made from virgin materials. Once used they are not recyclable. They can be composted but they are rarely collected and sorted for composting. Indeed Americans send over 6 million tons of paper towels to landfills every year.

What if there was a way to reduce paper towel use by half. Or more? Welcome to Shake & Fold!

Shake & Fold is a campaign to reduce paper towel waste. Here's how it works: after washing, shake your hands to get some of the water off. Then take a single paper towel. Note that it doesn't matter how poor the paper quality is or even if the dispenser spits out only five inches. Because the magic happens when you fold the single paper towel in half. Folding traps air in the middle, i.e., "interstitial suspension." This trapped air makes the paper towel stronger and much more absorbent. It will completely dry your hands. Guaranteed. Every. Single. Time.

Shake & Fold was created by Joe Smith who delivered a Tedx Talk at Concordia University in 2012. I saw the YouTube video in 2015 and it changed my life. I knew I had to locate Joe Smith and pick his brain. I combed the internet until I found him - and he lives only 30 miles away in Portland, Oregon!

I met with Joe he told me gave me his blessing to go ahead create a Shake & Fold campaign. I've been working on it ever since.

I wrote a grant to my town's Sustainability Commission and got money to print enough stickers to place on every elementary school paper towel dispenser in the local school district. I also have been asking businesses who use paper towels to place stickers on their dispensers. Now these businesses are featured here on the "Wall of Waste Nots."

But this campaign has grown beyond small town Oregon: I've been contacted by people in Australia, Israel, Lebanon, Indonesia, New Zealand, Canada, Sweden, Holland, Italy, Germany, the Czech Republic, Slovenia, Russia, Brazil, Scotland and England. In the U.S. I've heard from folks from California to Maine and from Florida to Washington State.

Now there is a Shake & Fold song which is great for spreading the word in schools.

You can help share Shake & Fold by talking to people and teaching by example in every washroom. You can also post stickers on paper towel dispensers where you work, eat and play - with permission first, of course.

To receive four free stickers, you just need to help with postage. Here's how:

Shake & Fold
PO Box 572
Forest Grove OR 97116-0572
If you’re never used an SASE here are step-by-step instructions:
https://www.wikihow.com/Send-an-S.A.S.E.-(Self-Addressed-Stamped-Envelope)
A small 6 3/4” envelope is perfect, a letter-side #10 envelope is fine. There is no need to send anything larger. Also, a first class postage stamp currently costs $.55

You may contact me directly if you have questions about the campaign. 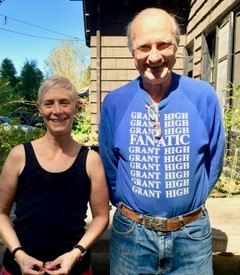